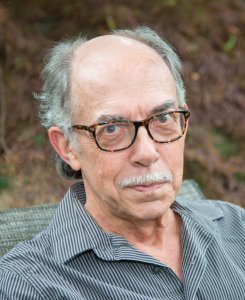 A product of parochial schools and the social & political upheavals of mid-20th century America, Columbus native Steve Abbott has been a community activist, alternative newspaper writer and editor, criminal defendant, delivery truck driver, courtroom bailiff, private investigator, unemployed stepfather, social-service PR director, and college professor. He was a founding member in 1984 of The Poetry Forum—now the Midwest’s longest-running poetry series—and continues to co-host the weekly event at Bossy Grrls Pin-Up Joint in Columbus. He is a Distinguished Professor Emeritus in English of Columbus State Community College. His poems have appeared in dozens of literary journals as well as in several anthologies. He received an Ohio Arts Council Excellence Award in Poetry in 1993 and the following year was the first writer to be awarded an OAC residency at the Fine Arts Work Center in Provincetown, MA. He has presented readings throughout the eastern United States.

He has two full-length poetry collections. A Green Line Between Green Fields (Kattywompus Press) was published in 2018, and A Language the Image Speaks, a collection of ekphrastic poems (responses to visual art), was released by 11thour Press in September 2019. He also has five chapbooks: A Short History of the Word (1996) and Greatest Hits (2004), both from Pudding House; The Incoherent Pull of Want (NightBallet Press) and Why Not Be Here Now? (11thour Press) in 2016; and Kicking Mileposts in the Video Age (Moria Poetry, 2017). He has also recorded a live reading on CD titled Stardust in Franklin Park. He edited the anthologies Cap City Poets (Pudding House, 2008), a collection of 74 central Ohio poets, and Everything Stops and Listens (OPA Press, 2013), containing work by members of Ohio Poetry Association. He also edits Ohio Poetry Association’s annual journal Common Threads, and in 2015 he represented the OPA on the Ohio Arts Council panel selecting Ohio’s first Poet Laureate.

A Language the Image Speaks: Poems in response to visual art by Steve Abbott

The Incoherent Pull of Want by Steve Abbott

In A Green Line Between Green Fields by Steve Abbott

Why Not Be Here Now?: Columbus Poems by Steve Abbott