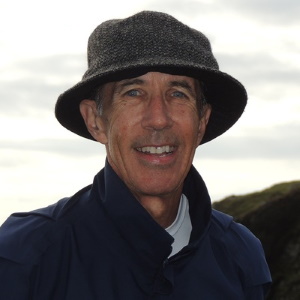 Dr. Robert Kroeger, a native of Youngstown, graduated from Ohio State University’s College of Dentistry and served four years of active duty in the U.S. Navy, ending with the rank of lieutenant commander. He and his late wife, Brenda, moved to Cincinnati, where they raised five children and where Dr. Kroeger practiced general dentistry from 1977 to 2010, when he retired. He and his wife, Laura, also live in Cincinnati, where they enjoy spending time with eight grandchildren. Dr. Kroeger is a second-generation artist, although unlike his father, Francis, who held an art degree from Notre Dame, his professional art career blossomed later in life. Although he did not immediately follow in his father’s footsteps, Robert’s career as a dentist allowed him to study color values and facial aesthetic principles in smile design. In writing, Dr. Kroeger has published two books on dentistry, a book on vitality and seven books on golf in Scotland, England, Wales and Ireland, including To the 14th Tee, The Links of Wales, The Golf Courses of Old Tom Morris, Golf on the Links of Ireland, Golf on the Links of England, Complete Guide to the Golf Courses of Scotland and The Secrets of Islay. This is his first book on old barns.