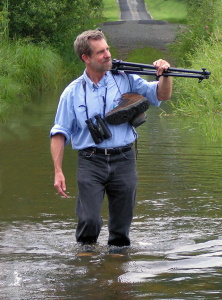 Kenn Kaufman is a writer, artist, photographer, lecturer, and lifelong student of birds and nature. As a teenager in the 1970s he hitch-hiked all over North America in pursuit of birds, an adventure later chronicled in his book Kingbird Highway, which has been designated as a “Classic” by the National Outdoor Book Awards. Later he spent several years as a professional tour leader, taking groups of naturalists to all seven continents. He has written a dozen books, including his own field guide series, Kaufman Field Guides, published by Houghton Mifflin Harcourt of Boston. The series now includes volumes on North American birds, butterflies, mammals, insects, advanced birding, the nature of New England, and the nature of the Midwest. His other books include Lives of North American Birds and Flights Against the Sunset. The latest is A Season on the Wind: Inside the world of spring migration, published in April 2019. Kenn is a field editor for Audubon magazine, a fellow of the American Ornithological Society, and the only person to have received the American Birding Association’s lifetime achievement award twice.

Since 2005 Kenn has lived in Oak Harbor, northwestern Ohio, with his wife, Kimberly Kaufman, who is currently the director of the Black Swamp Bird Observatory.

INCLUDES BOOKPLATE SIGNED BY THE AUTHOR

A Season on the Wind: Inside the World of Spring Migration (Hardcover)

Kingbird Highway: The Biggest Year in the Life of an Extreme Birder (Paperback)